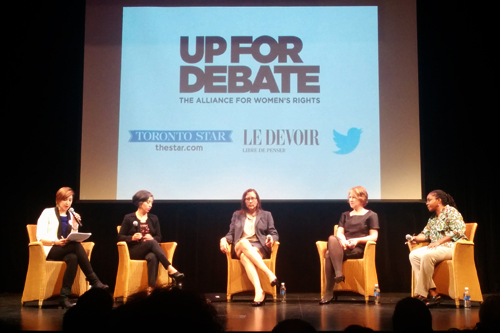 With the federal election quickly drawing near, we attended Up For Debate‘s Interview Launch event on September 21st, featuring interviews with four of the five federal party leaders. What was this event about? Well, the last debate we had on “women’s issues” was in 1984 – over two decades ago. And in that time, not enough has changed.

The gender pay gap persists (for full-time workers, women make 82.4% of what men make today, compared with 77.2% in 1977). Women make up only 15.9% of corporate boards (a figure that has barely moved in recent years), and hold 8.5% of top paying jobs in companies. In all of the TSX 60, there is only one woman CEO – Dawn Farrell of TransAlta. Because we all should be aware of where the parties stand in addressing gender inequality, the evening was to bring discussions on violence against women and economic empowerment to the fore.

So I was excited to hear the leaders (or at least, most of the leaders) speak on these issues, and to get a sense of their level of understanding and perspective. Among the things that were said:

– May, Trudeau and Mulcair all agreed we needed a national plan to address violence against women.
– May talked about re-starting the Women’s Caucus in parliament, which helped to confront the harassment that was occurring in the House of Commons.
– Mulcair referred to his $15-a-day childcare program, designed to alleviate the weight on families’ financial expenses and on women’s career advancement.
– Trudeau stressed that violence against women is not a women’s issue, but everyone’s issue – and that men have a role to play in solving it.
– When asked why women remain so vulnerable to violence, Duceppe said that religions have not been very open to women and that this has implications on philosophy and politics.

And while the panelists commented on the leaders’ statements, another interesting thing happened. Respondents to our Twitter activity throughout the evening chose overwhelmingly to focus on one topic – that of gender representation in spheres of influence.

That people decided to focus on this, rather than the other issues that were discussed, took me by surprise – but perhaps it shouldn’t have. For one thing, it’s hard to disagree with the statements that violence against women must be addressed, or that better and more available childcare options would help women stay at work. However, arguing that there aren’t enough competent women is a derailing tactic that does nothing to help women gain equal recognition and opportunities, even when they are equally competent. Studies have confirmed that when presented with identical resumes, applications bearing a male name are rated higher for competency than those bearing a female name. Interviewers may internally question a woman’s dedication to the job if they think she is of child-bearing or child-rearing age. And male-dominated spaces which hire through connections or referrals are likely to stay largely male. Unconscious mind-sets and limited hiring practices are barriers to, as one commenter said, getting the “best people”.

Add to this the studies (eg. Catalyst and McKinsey) that show diverse teams drive higher performance. Our country is diverse, and we need governing bodies that reflect the make-up of their constituents and customers in order to make the best decisions – decisions that reflect the needs, values, and issues important to those they serve.

Either way, we be encouraging women to speak up, to express their perspectives and to lean into their ambitions – rather than tearing them down on fact-devoid assertions of incompetence. A woman’s place is not up for discussion, nor is it something anyone else has the right to prescribe. A woman’s place is where she can make the most impact in the way she sees fit. A woman’s place is one where she has a voice, whether by governing, advocating for herself, or voting. We thank Up For Debate for giving voice to issues that are important to over half of our country’s population (and which should be important to all).

It must be considered an economic imperative to create the conditions for equal access to opportunity – so that we truly can have the best; not only the best people, but the best teams in place to compete in a complex global marketplace. As Laurie Monsebraaten of the Toronto Star said, the more diverse views you have on any topic, the better ideas come about.