"Because it's 2015:" a new federal cabinet with equal gender representation - Lean in Canada Skip to content 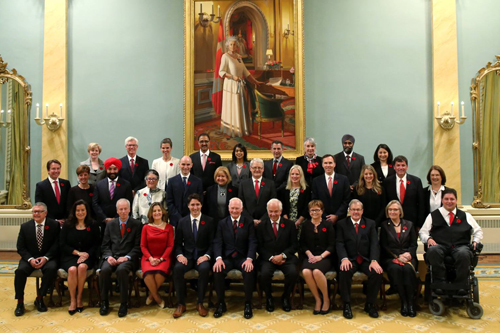 Widely quoted yesterday was our newly sworn-in Prime Minister Justin Trudeau’s succinct response when asked why appointing a gender-balanced cabinet was important to him. “Because it’s 2015,” he replied, to the delight of many. And so it was, as promised – a federal cabinet of 15 women, 15 men, and Trudeau himself.

Leadership sets the tone, and much of what Trudeau has been doing in the public eye is just that. He appears to be setting the stage for a government that is open and balanced, where people are encouraged to consider a diversity of viewpoints, and where efforts will be made to listen to the voices of all Canadians. While we still have a ways to go in other forms of diversity (most notably, racial diversity), our new cabinet is certainly a step in the right direction.

The women of Trudeau’s cabinet are:

With the new cabinet, Canada is now tied for third place (with France and Liechtenstein) in female representation of ministers. Sweden and Cape Verde come in second, with 52.9%, and Finland tops the chart at 62.5%. Further down the list is the United Kingdom with 33% women, and the United States with 25%.

Since the millennium, we have wavered between 22%-29% representation of women, rising to 31% in Harper’s latest cabinet, and now sitting at 48%. A history of federal firsts: