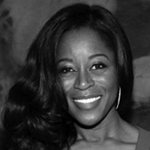 Andrea Bain is an author, podcaster and on air personality. Most recently she was one of the hosts of the national lifestyle program “The Goods” on CBC. She is also the author of the book, “Single Girl Problems”.  This two time Canadian Screen Awards nominee has also hosted a number of lifestyle programs including “Live Here Buy This” (HGTV) ‘Revamped’ (Slice) and ‘Three Takes’ (Slice) Her career began in the newsroom at CTV and Global news and she later worked as an entertainment reporter for Reelzchannel (Los Angeles) where she interviewed Hollywood heavyweights like Oprah Winfrey, Angelina Jolie, Martin Scorsese and Madonna.