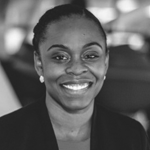 Connecting people is one of Emily’s life-long passions.  Seven years ago, she founded How She Hustles, a network that connects 5000 diverse women through social media and special events in Toronto. Her buzz-worthy women’s brunches, panels and networking events have sold-out in mere hours, consistently trending on Twitter, with up to 400 guests from Olympians to CEOs.

For seven years, Emily also served as a senior communications strategist for CBC in Toronto, the most competitive media market in the country.  Emily created HERstory in Black, a digital photo series of 150 inspiring black women that earned the attention of the Prime Minister on social media, national media coverage, and was the subject of a 1-hour TV documentary. For her leadership with an innovative team, Emily was named a 2017 CBC President’s Award winner – the top recognition for employees at Canada’s national public broadcaster.

In 2017, Emily was named a CivicAction DiverseCity Fellow – one of 25 rising city leaders making an impact across the GTHA – and became a champion for female entrepreneurs through SheEO. Previously, Emily was nominated for a YWCA Toronto Women of Distinction Award and was named one of CIBWE’s 100 Black Women to Watch in Canada in 2015. She holds degrees in journalism and music, and has studied public relations.

Emily is a frequent public speaker and enjoys life with her two young sons and awesome husband.