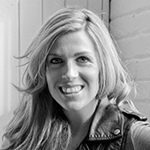 Joanna Griffiths is the founder, CEO and inventor of Knix Wear, one of the fastest growing companies in Canada and globally in the intimate apparel space. Joanna has been featured in Forbes, Fast Company, Entrepreneur Magazine, Dragon’s Den and hundreds of other media outlets.

A conversation with her mom, a doctor and mother of four, inspired Joanna to start Knix Wear. It was then that she discovered that 1 in 3 women experience the occasional light leak and realized that women’s underwear just wasn’t cutting it, and that women everywhere deserved an underwear upgrade.

Knix Wear launched in winter of 2013, and three short years later, has become the leader in active intimate apparel. Their growing product line is now sold online through www.knixwear.com and in over 500 retail doors across North America. Knix Wear holds the record for the most-funded fashion project in Kickstarter history and the most-funded women’s project with over $1.6M in product pre-sales for their 8-in-1 Evolution Bra.

Joanna holds an MBA with distinction from INSEAD, the top-ranked MBA program in the world, where she won the Business Venture Competition and the Women’s Award for Entrepreneurship – securing the initial capital to start the business.

She sits on the advisory board for Master Card’s Youth Entrepreneurship Strategy and has a passion for mentoring other young female entrepreneurs.

Joanna lives in Toronto with her husband, Dave, and her dog, Alfie.