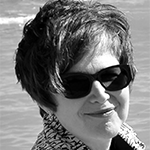 Nancy Vonk is co-founder of Swim, a “creative leadership lab”. From designers to bankers to “America’s Top 40 Architects Under 40”, the people she works with get new tools and insights to have greater impact. Swim’s unconventional approach to leadership training has been noted in Forbes and Fast Company.

Nancy was Co-Chief Creative Officer of Ogilvy Toronto from 1998 to 2011. She led their office to global recognition for work like Dove’s Campaign for Real Beauty. Her teams brought home the world’s top awards including two Cannes Grand Prix.

Nancy was included in Creativity magazine’s Top 50 Creative People of 2008, and named advertising Women of the Year at the WIN Awards and the AWNY Awards in 2007. In 2012 she was included in Advertising Age Magazine’s 100 Most Influential Women in Advertising. She continues to be thought leaders in the ad industry; Nancy serves on the board of The One Club in New York and Creative Circus in Atlanta.

Nancy penned Pick Me (Wiley & Sons) in ‘05, now a staple in advertising schools from Texas to Turkey. Their bestselling ’14 HarperCollins release, Darling, You Can’t Do Both (And Other Noise To Ignore On Your Way Up), is described by Fast Company co-founder Alan Webber as “A guide to breaking the rules that stunt careers and wreak havoc at home. The how-to follow-up to Lean In.” She’s tapped for her perspective on workplace gender issues by companies, schools and organizations like Facebook, Google, UCLA, Princeton, Bell, HBC, Catalyst and Women of Influence. Her career advice and thought leadership appears regularly in spaces like Huffington Post and Fast Company.

Nancy speaks at events across North America on subjects ranging from inclusive leadership to how to tap into your greatest creativity. She is represented by the National Speaker’s Bureau.