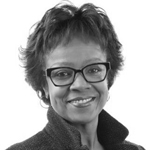 Noelle Richardson is a pioneering leader in diversity and a consultant in organizational change strategies to maximize human potential. For over 20 years, she has spoken on issues of social inclusion and organizational practice in North America, the continent of Africa, at the European Union and has just returned from Pakistan where she has been doing work with the Asian Productivity Organization.

In 2008, Noelle was hired as the Chief Diversity Officer of the Ontario Public Service (OPS), the first such position in any public sector organization in Canada. She has led the creation and implementation of a diversity and inclusion strategy for both the OPS and the broader public sector agencies of the Ministry of the Attorney General. As a result of her seminal work on creating an inclusive public service, the OPS has been recognized as one of Canada’s Best Diversity Employers since 2008.

History in the making! It's a good day for women e