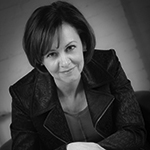 Shannon Skinner is an award-winning television and radio host, inspirational speaker and author. She is the creator and host of the television series and online platform, Extraordinary Women TV with Shannon Skinner, the ultimate online life-guidance resource for women. She has interviewed hundreds of influencers, experts and celebrities. Some notable guests include actress Mariel Hemingway, TV personality/entrepreneur Debbie Travis, and singer/songwriter Jully Black.

Shannon is the author of The Whispering Heart: Your Inner Guide to Creativity, a how-to book on unleashing creativity and living an extraordinary life. As a writer, she contributes to several publications including The Huffington Post, and covers topics such as creativity, inspiration, feminine leadership, influence and travel.