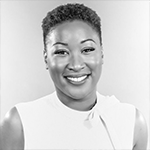 After raising over a million dollars to help underrepresented entrepreneurs launch their tech startups in Canada, Tamar realized the importance for minorities to see positive reflections of themselves within the tech industry. In 2015, Tamar launched Tech Spark – a youth focused technology and design school committed to creating diversity in tech. As a result of her endeavors,  Tamar was named the Harry Jerome Young Entrepreneur and honored as one of 100 Black Women to Watch in 2015.

Despite being told a black woman would never be successful in tech, Tamar raised 6-figure investments for Tech Spark, educated over 300 youth in under two years and is on track to educate 20,000 youth by the year 2020. In 2017, Tamar was honored as Canada’s top 150 black women creating impact across the nation. In the Spring of 2018, Tamar will launch Black Women Code as a continuum of her work in tech education with chapters across Canada and the US.