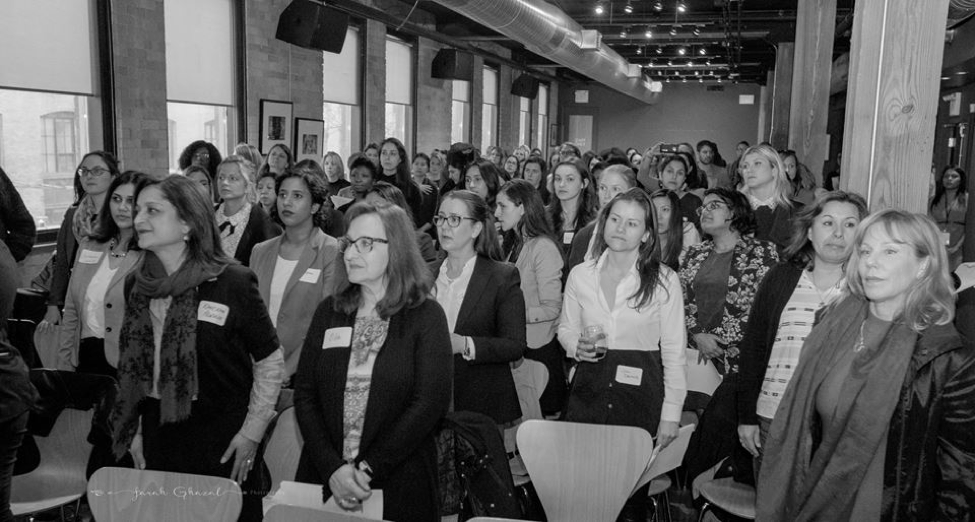 Lean In Canada invites you to get to know the women who are at the forefront of STEM – science, technology, engineering and mathematics. When it comes to the sciences, women tend to choose professions more focused on life sciences and social sciences, so there is a wide gender gap in fields such as computer science and engineering. Our panel of women in STEM will be discussing what the past has been and what the future can look like for STEM if we encourage more diverse involvement in this area.  So, join us as we bring together a panel of women to discuss the need for promoting women’s education and career growth in STEM. Our panel includes Dr. Imogen Coe, Tamar Huggins, Inmar Givoni and Eugenia Duodu.

Dr. Imogen R. Coe is the founding Dean of the Faculty of Science at Ryerson University and an affiliate scientist in the Li Ka Shing Knowledge Institute, Keenan Research Centre at St. Michael’s Hospital where she leads a research team studying cellular responses to chemotherapy. Dr. Coe is a national leader on the issue of equity, diversity and inclusivity (EDI) in science, technology, engineering and math (STEM) and frequently speaks about the importance of leveraging the diversity opportunity in STEM-based based sectors including industry and business. In fall 2016 she was recognized by WXN as one of Canada’s Top 100 Women.

After raising over a million dollars to help underrepresented entrepreneurs launch their tech startups in Canada, Tamar realized the importance for minorities to see positive reflections of themselves within the tech industry. In 2015, Tamar launched Tech Spark – a youth focused technology and design school committed to creating diversity in tech.

As a result of her endeavors, Tamar was named the Harry Jerome Young Entrepreneur and honored as one of 100 Black Women to Watch in 2015. Despite being told a black woman would never be successful in tech, Tamar raised 6-figure investments for Tech Spark, educated over 300 youth in under two years and is on track to educate 20,000 youth by the year 2020. In 2017, Tamar was honored as Canada’s top 150 black women creating impact across the nation. In the Spring of 2018, Tamar will launch Black Women Code as a continuum of her work in tech education with chapters across Canada and the US.

Inmar Givoni is the Director of Machine Learning at Kindred, where her team develops algorithms for machine intelligence, at the intersection of robotics and AI. Prior to that, she was the VP of Big Data at Kobo, where she led her team in applying machine learning and big data techniques to drive e-commerce, customer satisfaction, CRM, and personalization in the e-pubs and e-readers business. She first joined Kobo in 2013 as a senior research scientist working on content analysis, website optimization, and reading modelling among other things. Prior to that, Inmar was a member of technical staff at Altera (now Intel) where she worked on optimization algorithms for cutting-edge programmable logic devices.

Inmar received her PhD (Computer Science) in 2011 from the University of Toronto, specializing in machine learning, and was a visiting scholar at the University of Cambridge. During her graduate studies, she worked at Microsoft Research, applying machine learning approaches for e-commerce optimization for Bing, and for pose-estimation in the Kinect gaming system. She holds a BSc in computer science and computational biology from the Hebrew University in Jerusalem. She is an inventor of several patents and has authored numerous top-tier academic publications in the areas of machine learning, computer vision, and computational biology. She is a regular speaker at big data, analytics, and machine learning events, and is particularly interested in outreach activities for young women, encouraging them to choose technical career paths.

Eugenia Duodu holds a PhD in Chemistry from the University of Toronto and is the Chief Executive Officer of Visions of Science Network for Learning. As the CEO, she leads a team of passionate and talented colleagues whose focus is to provide engaging programs and opportunities for youth who are traditionally under-represented in science, technology, engineering and mathematics.  Her goal is to help make a long-lasting positive impact in communities through STEM engagement and in-turn allow youth to unlock their potential.